We're Back
It's been a while since the last blog. Incoboto is not gone, nor even resting.

The reason for my silence is simple: I've been very busy sorting the game out. I've begun to adopt the Team Ico approach (no, not take 4+ years to make a game) but to start stripping away elements of the game that aren't engaging or fun, and to highlight and accentuate the areas that are proving to be interesting. As such, two main areas have changed - and they are huge.

Helios?
Incoboto's story has always focused on the two themes of longing for the unattainable and loneliness. Helios, the sun-creature was always a (malevolent) puckish figure, offering you the universe while quietly taking you further away from that which was truly important. Things have changed somewhat.

At one point in development his cheeky little face loomed up from behind a planet and surprised me. I suddenly realised that his central placement in each solar system was nonsensical. He's an enormously appealing character who was in a strangely off-screen role for most of the time. Silly.

I felt this had to be fixed, and thus initially just had him follow you about a bit, mocking you. This in turn pointed out that - far from being a menacing figure - he was actually quite comforting and friendly: indeed, the only friendly thing Inco had seen in his lifetime.

As such, Helios could not stay as he was. Now, Helios is no longer so menacing and has a wide range of powers he puts at your disposal. The player can now draw a lens on the screen by placing two fingers upon it. Helios will guide a beam of light through this lens. In this way the player can discover hidden things, kill off shadow baddies, power up contraptions and ultimately feel that his big glowing friend isn't just there to bob around like some infernal balloon.

The game's controls are now completely different, and much better for it. An entirely touch/tap/drag/hold style no-button interface was proving far too taxing for newcomers.

I watched as they failed to grasp the difference between a tap and a press ("How difficult can it be? I said tap! No, that's not a TAP that's a PRESS... and now that's a slide... TAP! TAP, GODDAMNIT!")

As a result, the game now has two buttons; one in each of the bottom corners of the screen. Press the left one and you'll go left. Press the right one and you go right. Press both and you'll jump. No tapping, no hold and release. Just press. Easy to explain.

This left me the entire screen free for the player to use as a 'more interesting interface'. You still pick things up, throw them, draw lenses and drag machine-levers around with the nice little tap and drag interface I developed before, but now it never clashes with the basics of movement.

It's lovely. And it's finished. Hoo-rah.

Scripting
I'm now heavily into the scripting part of the game. I have largely abandoned the total randomisation with which I had planned to populate my world. Imbuing randomness with meaning is very hard indeed.

The game now creates and populates each universe to a very basic degree, but then I go in after and choose where key items and characters go. It's a nice compromise, and I hope it works out as the levels come together over the next few weeks.

In the meantime, here are some screenshots: 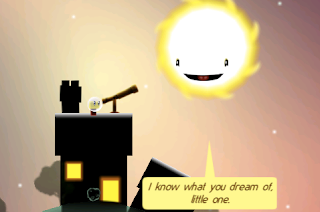 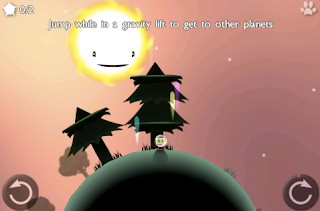 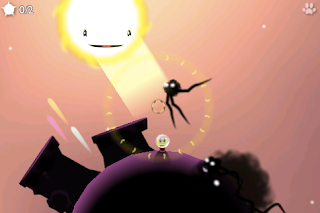