Music and Up, Up and Away!

I went through three musical revisions on this project. I feel a little like Goldilocks.

First effort (rough and unfinished) was this. Feedback was that it was a little too cold. See - porridge analogy? No? Never mind. Consider this a similie free zone. After spending over a day coming up with various ways of microwa... (no metaphors either) 'humanising' it a bit, I decided to try again with something completely different. Something delicate, moving, and... stringy?

As a result, my second effort was this. I composed the strings on - believe it or not - an alto glockenspiel. I think it's musically successful, but seriously depressing in a 'This Mortal Coil' way.

Also, as I really have no ability whatsoever with drums, I used a Tenori-On to come up with a glitch beat, but the result was... um... variable. No, that's too polite.

They sounded great in my little studio/office, but if you play it on anything like an iPhone or iPod speaker...

As a result, I decided to go with this piece I composed a while ago. I think it fits and hopefully will neither aggravate nor detract from the playing experience. Mayhap it'll even enhance the mood for people playing on headphones.

To the App Store we go!

As of the 26th of November, 2009, Flaboo was sent off to the Apple App Store approval folks. Hopefully they'll be kind to this fat yellow chick and allow him to be released into the wild where he belongs.

Wish us both luck, and keep a look out for this little icon at an App Store near you.

Flaboo! Off to Apple Next Week!

I've learned a few things over the last month. They were odd lessons: the sort you pay for without knowing exactly what it was you wanted to learn, and then sit weeks later, honking out scales on an instrument the size of a walrus wondering if the strange, threatening man who claims to know how to play the tuba is actually a music teacher, or a brickie whose house you turned up to one day who thinks it's hilarious you pay him £20 a lesson when he wouldn't know Chopin from Rodan the spikey-nosed monster Godzilla once fought. 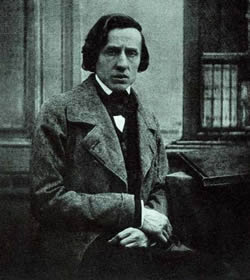 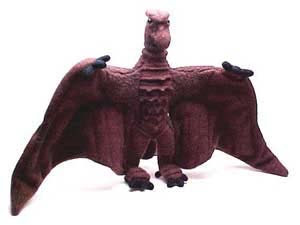 (The top one is Chopin)
Believe it or not, this wasn't a massive tangent. No, really. Oh, maybe it was. Anyway...

Lesson 1: Names are very important. In my head, 'Bounce' has been 'Bounce' for as long as I've been thinking of it. That's ages (a random value which expands or diminishes an amount corresponding to the distance to the nearest Microsoft employee).

Despite this, apparently, other people in the world have the gall-faced-bear-cheek to think their game is more deserving of the moniker. In fact, I can't help but feel that - in light of the most recent baby boom (yes, of course having more kids than usual during the world's worst recession is the best of all possible plans - no really) there'll be a lot of cheques written to and from Bounce Smith, Bounce Jones, and all the other little Bounces out there once I reach my dotage. Or maybe there won't. Perhaps cheques will be treasured and meted out like golden tickets to a version of Willi Wonka's chocolate factory run by the same people who own Pound Land...

As a result, it seems that only coining a brand new, ludicrous, non-existent name will stop 2 billion people having got there before you. As a result, Bounce is now 'Flaboo!' 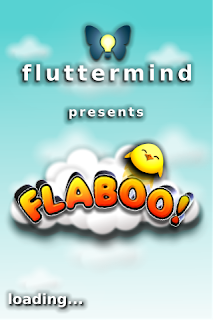 Look left and you will see the title screen in all its majesty. Look right to continue reading.

In this year's 'flu season, can I suggest you all start sneezing 'Flaboo!' whenever possible? Please? I can't afford marketing.

In renaming the game, I've embraced the silliness suggested by the title and made various changes.

1) The game now yells 'FLABOO!' at you when you start. Just in case you forgot how silly the name was when you read the icon on the app page.

2) I've given random pieces of sage advice (like 'use an air horn when kids cry in restaurants) that float about in the background. Obey them!

3) Coffee now plays a large part in the game. I know that's not strictly 'Flaboo' related, but I have started calling coffee 'a nice hot steaming cup of Flaboo!' just to get people talking. As I said, marketing is expensive.

Lesson 2: So, music is a funny thing. Not funny 'haha', more funny in an 'oh, why did you have to sit next to me on the tube, you strange, smelly, vaguely threatening man - and didn't you take me for tuba lessons for a year?' kind of way.

For months I've been using Boards of Canada's 'Music is Math' as a stand-in for my own music. I wanted to ensure that the game's mood was all set up before embarking on a musical spree and creating something potentially jarring with the game's rhythm.

My usual musical outings sound like this. It's a little sloooooooowwwwww for a game as bouncy (I mean 'flabooey') as mine. But since the game's finished I now have no excuse for not writing the music and getting it just right.

I wanted Flaboo! (gesundheit) to be 'all of a piece' with no part jarring, or seeming out of place. A one-man-show like mine is probably the easiest way to pursue this... or it would be if I could write happy music with a modicum of sincerity.

I'm not a miserable git, but I don't like my music too saccharine: unless it's so happy it comes around the other side of 'twee' and starts sounding sweeter than unicorn farts. Then I'm up for it. Like múm.

As a result, Flaboo! (Oi? You looking at my pint?) now has music that sounds... um... surreal. Anyone remember Marble Madness's weird FM-synth ambience? Imagine that with a slightly reluctant beat and you're half-way there. The other half is a wide open vista dotted with the carcasses of worn-out gods who have been ignored to death. And twinkly bell-ish bits.

As a result, this game about a little chick who desperately wishes to fly despite his excessive weight now has a very specific, unexpected character. It's already a slightly strange game and it just got a little stranger. Personally, I like it. I hope others will, too.

I'll update this post at some point soon, after I've done the final mix.

Lesson 3: People love repetition. And people hate repetition. As developer, I've now played the game over a thousand times. Personally, I got a little tired of playing the same bits over and over again, even though I loved the simple, rhythmic nature of the game.

In order not to bore myself into an awkward somnolent state, Flaboo! (who?) now randomises every aspect of the game once you get over a certain height. Didn't like that stack of single clouds on your last game? Well, this time you might be plunged into darkness, with only lightbulbs to stave off the shadows. Next time it'll be different.

In addition to the randomisation the game intelligently alters the pacing of the game so there is a constant rhythm of tension and release. Not enough games do this. They are either easy or hard, or random mixes of both. Who hasn't put down a game because of some stupid difficulty spike?

Flaboo! looks at your game-playing session as a waveform and adjusts the difficulty dynamically, flowing neatly from 'challenging' to 'comfortable' and back again as time goes on. As a result, you're never bored and you're never frustrated. I believe this is where the populace usually says: "Result!" I wouldn't know - I don't get to see them much.

Anyhow, once I've remixed the music, this game is going off to Apple for approval.

Please wish both me and the little chick good luck.
Posted by Dene at 9:30 AM 1 comment: