Just a quick teaser of info for anyone out there who might be interested.
Here's a screenshot of the game as it currently stands: 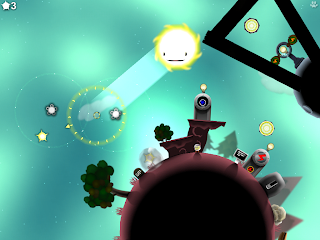 In the shot you can see Inco (little guy in helmet) and Helios off exploring a planet featuring Helions (stars) encased in quartz, swingable Grapple-points (huge fun to use), PowerPod generators, Microportal units, and a computer screen with a message from The Corporation apologising for the genocide of all other life in the universe. Fun stuff. 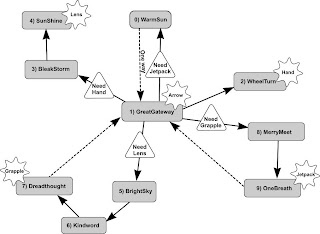 I always find it a huge amount of fun creating maps like this. For me, it's a sort of statement of intent, and a mark of confidence: one of the first things that must be done to make a world 'real'.

Creativity is all arbitrary. Meaningless. If Agent Cooper had preferred tea, he'd have been a different, but equally good Agent Cooper. There would have been 'Damn Fine Cup of Tea' mugs, bumper stickers and similar merchandise. People would have said: "Bet he's going to have a cup of tea! That's soooo Cooper."

If this seems wrong to you, it is only because you have - as Lynch would put it - eaten the Donut and not the Hole. As an end-user, you don't get to see what was thrown away. You don't get to experience the alternative universes of potentialities that might have been. Lucky you.

For us inside the creative process of a project, creative decisions are only made convincing and 'real' by acting as if each decision is correct, and maintaining this for a prolonged period of time. This can be difficult due to the many forces that buffet creativity around and attempt to alter or influence the constructs you have in your head.

This map may change due to the realities of development, but I'll be sitting here for much of the time looking at this map and by sheer force of magical will, making it as real to my own mind as I possibly can.
Posted by Dene at 4:10 AM 4 comments: